I’m delighted to be away in Canada this month, on a tour with The Paul McKenna Band. We started off at a festival in idyllic Canmore, near the beginning of Canada’s Rocky Mountains (although the picture I took doesn’t do it any justice). We’ve met some really cool people out here so far, including awesome singer Foy Vance, who we were delighted agreed to play a song with us at Canmore (see video). At time of writing we’re headed up to the famous Edmonton Folk Festival, and then on to New Brunswick. 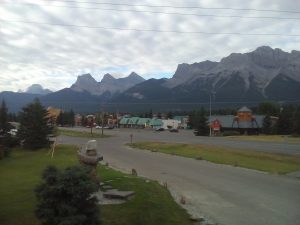 With INYAL, we’ve just finished recording an album, and are hoping to release it this year or early next, so look out for that if you’re interested. We’re very lucky to have BBC Radio 2 Young Folk Award winner Josie Duncan and BBC Radio Scotland Young Traditional Musician of the Year 2017 Charlie Stewart featuring on it. If you want a preview you’ll be able to catch us at Colonsay Festival and Skye Live next month!

As the peak wedding season draws to a close, I’m looking forward to playing at a few all over the country when I get back, and also to touring with Tannara in the Autumn.